Composting. Easier, and Cheaper, than you Think.

Maybe it was all the table scraps we were throwing in the trash.  Maybe it was the annoyance of bagging leaves every fall.  Or maybe it was the heaps of chicken crap piling up in the coop.  Whatever the reason, five years ago the hubs and I decided to start composting and so far it has set us back, oh, about $32 and some change.  But we also haven’t bought soil enhancement in half a decade. 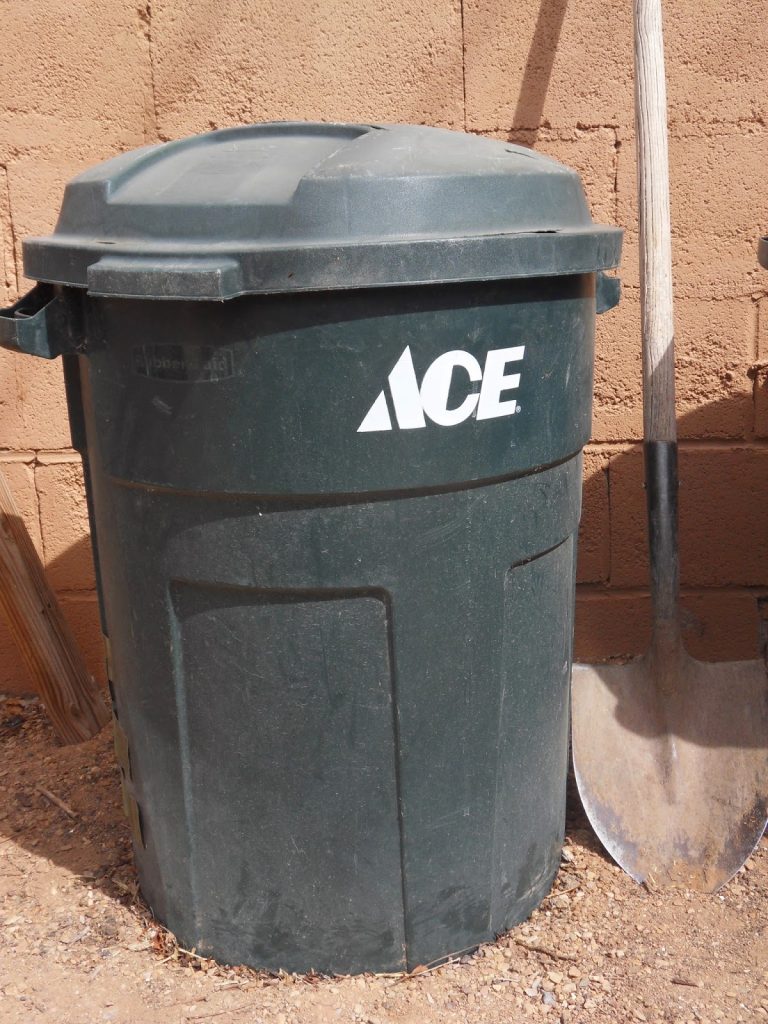 Not sexy, but low maintenance. I like to think of myself that way.

What do I need:

You need a shovel and two containers.  One for the yard and one for your kitchen counter.

You can drop $100-300 at the Home Despot on a fancy composter OR $15 on a large, Rubbermaid trash can.  Even better, find one at the Re Store.  If you do indulge in the SUV composter, get one that spins around or has a large enough opening to get in there with a shovel to stir things up.

For us, a lid was important.  We live in a city that hosts a company called 310 Solar because we get that many days a year of NO RAIN (lately it could be 350 Solar).  No rain means low humidity and a steamy, stinking mess is what you want going on inside that bin.  So get a tight-fitting lid to keep in that essential moisture and heat.  **Plus – a lid keeps the furry critters out of your compost.

In the kitchen, keep a small container with a good lid to keep the bugs out and smell in.  Preferably one you can open with one hand or you’ll find yourself wrist-deep in scone batter trying to throw away a banana peel with your teeth.  Our bin is terrible.  You have to bear-hug it with your arm and twist off the top with your other hand while you drop eight potatoes worth of peels on the floor.  And while you’re at it, get one with a large opening – larger than say, your plastic coffee filter.  Our opening is the same size as our filter and everyday I’m burning through a rag trying clean black sludge off the counter.  ZW FAIL.  Also get one you can rinse out easily.  Ours is hard to clean and I’m sure there is pre-kid mold in there.

What do I do now:

If you go the trash can route, turn it over and cut a few quarter-sized holes in the bottom.  This will be the standing invitation to all the creepy crawlies out there to come out and enjoy the invertebrate soup kitchen you’ve just opened up.  To help things along you could also buy (or find, if you’ve got little boys) some earthworms and throw them in the can with a few shovelfuls of dirt.  Put the composter somewhere it gets sun all day.  Sorry, Portland.

What do I put in it:


Just about everything that comes out of your kitchen, 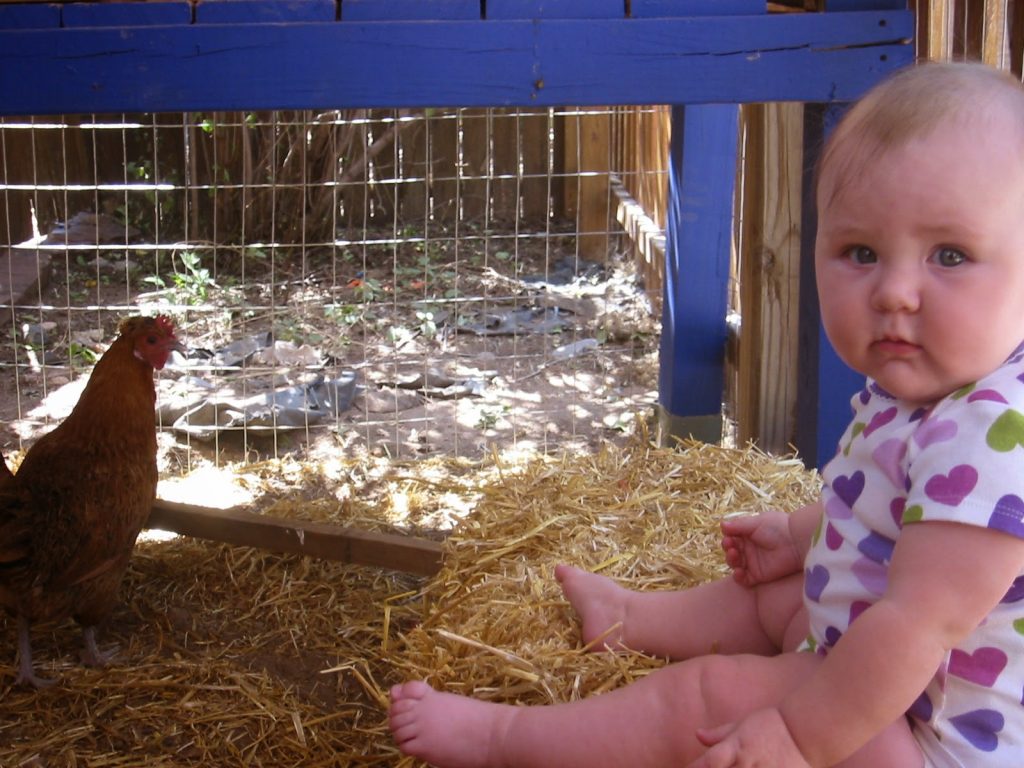 Only one of these girls is helping out the compost.

except a few things from the vegan hit list:  meat, bones and dairy.  I like this list here.  The amount of apple cores, banana peels (technically not allowed), bell pepper remains, coffee grounds, egg shells and “dinner my kids didn’t touch” that end up in my bin everyday is staggering.

To balance out the “green” waste of the kitchen, you’ll need some “brown” waste too.  Brown, as in leaves, twigs and shredded cardboard, NOT puppy dog pooh.

Speaking of excrement, I’m told we also gather poop from the chickens and that’s actually what makes our compost so yummy but I wouldn’t know because the unwritten rule at this house is the hubs deals with crap outside the house, and I deal with the human waste on the inside.  Not a bad deal.

How do I take care of it:

Stir it up occasionally.  That’s it.  Do yourself a favor and use a better shovel than the splinter-factory we own.

You can freak yourself out trying to get the “brown” and “green” ratio correct, but sources vary and some say fruit is carbon and others say its nitrogen and already I’m deeper into bio/chem than I declared (on the last day of high school) I would ever go.  So just mix it up with whatever you have on hand. 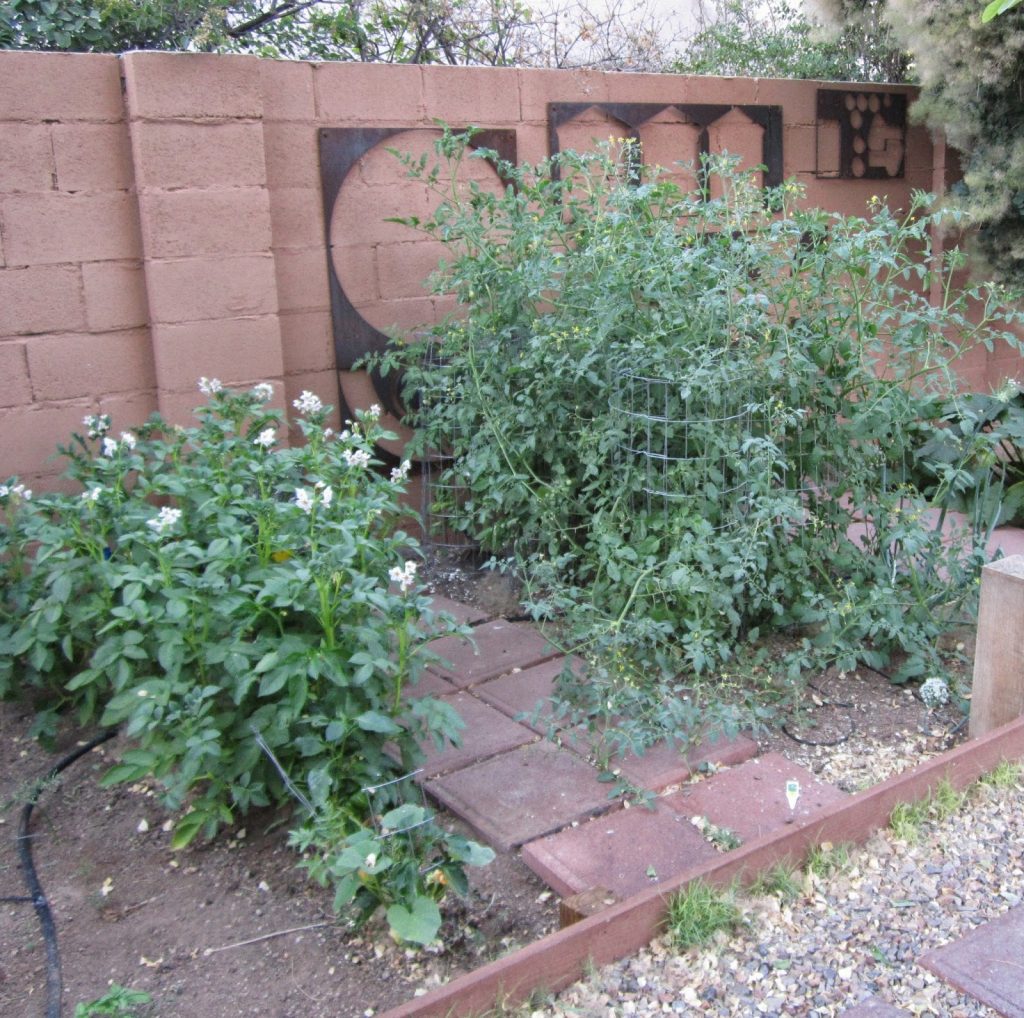 Those tomatoes hit 6 feet that year.

I double-dig our raised garden every year and mix in compost to help with the alkaline soil here in New Mex.  Our 7 x 12 bed takes exactly two trash cans worth of compost.  It stings a bit to use most of our compost in one sitting (more like back-breaking bending over), but I suppose that’s the point.

**the Hubs asked me to add these uses:

How do I feel when I see Whole Foods selling compost for $8 a bag:

Smug.  For about five minutes until you drop $10 on two containers of strawberries.