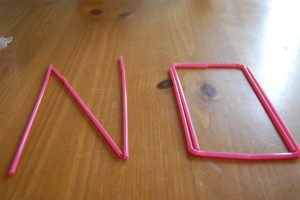 I don’t need one, my kids don’t need one (well, actually maybe they do, especially the three-year-old, so we’ll play that one by ear) so I want to train myself to tell the waiter “No straws, please,” even before I’ve snapped the youngest in the highchair.  Watch the vid with the turtle with the straw in his nose and you’ll be a convert, too.  Since we’re in the restaurant already, I could also ask for…

I kind of want to also start asking for no ice, too.  I’m a Freezing Frannie every time I go out to eat, for one.  Second, if you’ve ever worked in a commercial kitchen you know there’s always precious real estate, usually a corner, devoted to a noisy, leaky, energy-suckfest ice machine.  I couldn’t go full-Euro and have no ice my soda, but I’m also not drinking soda anymore (mostly).  If I go out to eat there are only four things I should be drinking:  water, coffee, wine or beer.  No ice requirement for any of those.  Seems like a futile gesture, but I’m totally doing it. 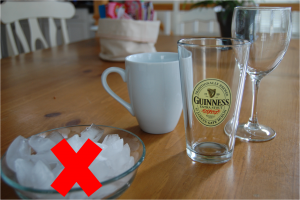 Cereal + milk = breakfast has admittedly worked for me for years, but I want to move away from it a bit and work towards a more Zero Waste and filling morning start.  Anything “milk”, whether it be cow’s milk, almond, soy, isn’t exactly Zero Waste (not to mention the plastic bag cereal comes in) and if I was to keep that equation I would rather it be homemade or bulk granola + yogurt = quick breakfast before early lunch.  This is a little scary for me because I think it might involve some paleo options, including the avocado but worse than that, veggies!  Veggies don’t belong near my mouth before noon!  But I predict moderate success.

This is a basic, homemaker skill.  But it is also a key to less waste.  By sticking to a group of 25 meals or so, I’m not looking for exotic, one-use ingredients, I know when I’m about to run out (because I’m reaching for it so often), I don’t flub up the preparation and have to order pizza (sad sigh…) and meal planning is little less stressful.  And while I’m at it… 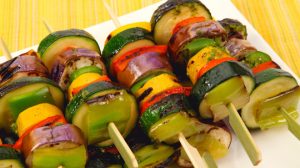 Now you are probably wondering, “How has she managed to keep two children alive this far?”  I know.  I too shake my head in disbelief when those munchkins rise from their beds every morning still processing oxygen.  Veggies are easy to keep Zero Waste, we need to eat more in this family, and since they are usually an afterthought, I thought if I could have cadre of quick sides on hand mentally, it would increase the odds of healthy and Zero Waste food making it to the table.

I don’t keep packaged desserts in the house (it’s because of me, not the kids, trust me on this), but I do like having sweets for the girls’ lunches or for after dinner.  I want to explore what ingredients I can get Zero Waste (like honey or whole wheat) and experiment with a few recipes, see how they stand up to freezing and run ’em by the girls for a taste test.  Then make about a 1000 of them.  I’ll let you know how it goes!

Because I have things I want to do with this site I can’t do with this layout and because you guys deserve a better-functioning blog.

That’s it!  Next week we’ll look at how my 2015 Zero Waste Resolutions went and then we’ll get started with the new year.  I can’t wait.  Take care.