Lessons Learned from a Recycling Expert

Refuse…reduce…reuse…then recycle, right?  If recycle doesn’t even medal in the Zero Waste alliteration, why did I devote an entire tab on this website to it?  And why is my recycle bin full every week?  Probably because I’m still not very good at the first three.

But after two hours of talking to Jessi Just of the New Mexico Recycling Coalition, I’m starting to change my attitude towards recycling.  Sure, it feels good.  It’s a tangible sensation – tossing that red Solo cup into the green bin.  But there’s so much we amateurs don’t know about the recycling industry.  After our conversation, I’m starting to want to shoot for gold and refuse that trash in the first place.

Here are the lasting impressions from the interview: 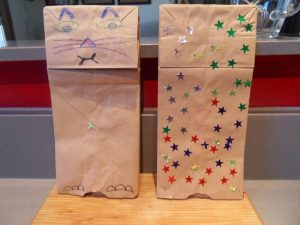 Too many stickers = trash.

Paper:  You can recycle way more paper than I thought.*  Not just white paper and cardboard boxes, but colored papers, used envelopes, old Gap shopping bags, even donut boxes provided they don’t have a bunch of grease on them.  Your kid’s art?  Throw it in with this caveat:  make sure it’s more paper than contamination, which in this case is glitter, glue, stickers, fake, plastic jewels, etc.  Also, don’t recycle wet paper.  It’s no good. 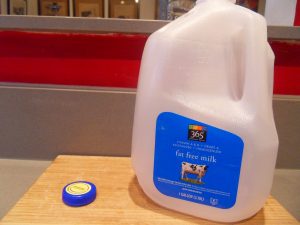 That lid may not be a big deal now.

Plastic:  We’re talking laundry soap and shampoo containers, that old plastic, faded water table your kids played with in the backyard five years ago.  Berry containers, soda bottles, occasionally plastic coffee cup lids.  Many recycling centers don’t require you to wash your containers or remove the lids.*  Now, they’d prefer it because they  might end up throwing the lids in the trash.  And when you don’t wash out your containers they make this nasty sludge at the recycle center that someone has to eventually clean.  But this is a huge step forward. 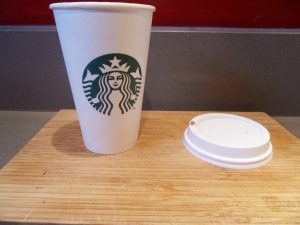 Slow down there smug Buckian.

Albuquerque has a large, national company handling its recycled material and therefore they accept plastic #1 – #7.  But just remember, the further away you get from #1, #2 and #5, the lower the quality plastic and the less people can actually do with it.  So just because you can recycle that #6 Starbuck’s frappuccino cup doesn’t mean you get to feel smug – bringing your own cup would be better.

That plastic that wraps around the front of your new pack of batteries for your kiddo’s latest noisy toy from Grandma?  Total crap-plastic (Jessi’s words that I will officially adopt as my own from here on out).  You can toss it in the recycle bin, the center will accept it, but they’ll probably just toss it out.  Like plastic bottle caps, sometimes it’s just easier to take them and let everyone else just assume it’s all going to be turned into a jungle gym in Central America.  That said, those Grandma toys aren’t going to stop coming and I don’t know where you can get batteries outside crap-plastic so we’re stuck with this one for awhile. 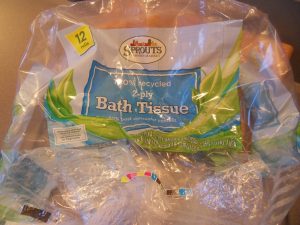 Don’t even think about it.

Plastic Bags:  Oh, just avoid them please.  Seriously, they aren’t good.  You can’t put any plastic bags in curbside bins here in Albuquerque.  You can take some to special collection sites around town but it’s limited.  The rule of thumb I use–is actually my thumb.  If I can tear a hole in it with my digits (think apple bag but not a shredded cheese bag) I can probably recycle it.  I’ll post on this topic later. 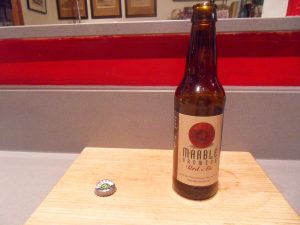 Probably worth it? Maybe?

Glass:  I’m starting to reconsider glass.  We can recycle glass in Albuquerque at a few places around town – separate from other recyclables.  But this isn’t the issue.  The problem is, glass is expensive to transport.  If you aren’t making new bottles locally, you’re paying to send them elsewhere – and a lot more than to ship, say, a bale of cardboard.  So maybe we’ll stick to growlers (or homebrew!) instead of bottles.

So….here’s what I changed after the interview:

What I’m thinking about changing:

Things I’d like to replace but haven’t found a source:

Things I know I should quit but can’t:

*Remember – this is Albuquerque I’m taking about.  Not all places take lids or even plastics beyond #1 and #2.  Santa Fe, 45 minutes north of my house exactly, won’t even take #3-7.  So check with your local center.