Pooh-Pooh to Poo-less. At Least for Now.

I have something many of you think you want.

I have long, thick naturally wavy hair.  It holds a curl well.  It’s in a hue that doesn’t really need to be colored.  It grows quickly.  And I’ve got volume.

Actually I’ve got too much volume.

Actually, I have Roseanne Roseannadana hair.

Do you remember her?  Played by the beautiful Gilda Radner on SNL?

I have been struggling to manage this hair since puberty – just consult my mother’s collage of school year photos for evidence – 12 years of different cuts to find a way that would let it naturally fall in a flattering layer on my head.

In college I found a way I knew I didn’t want to try – wedged between east-coast hippies who had renounced deodorant and shampoo in an overbooked yoga class, I tried to find the instructor through the mass of nasty, tangled Sideshow Bob dreadlocks.  That’s what going (sham)poo-less meant to me a decade ago.

But now the year is 2012 and I’m in Panama with no one but my immediate family to witness the results.  Poo-less is catching on with the mommy set.  Spend less time fighting your hair and more time fighting your children.  I mean making Millennium Falcons out of your PB&Js.  I like the idea because, well, I’m lazy and don’t like to wash my hair, but also, I could stop throwing away shampoo bottles.  A lot of hair = a lot of shampoo used per shower.

The idea is shampoo strips your hair of ‘good’ oil and in response it overproduces to compensate.  Poo-less lets your hair find a nice equilibrium.

So my new shampoo would be a tablespoon of baking soda and a cup of water.  I put it in an old conditioner bottle and shake it up.  The solution is chalky and watery and the first issue arises quickly.  My online instructions say to “rub mixture into scalp” but because of its consistency, most of it has already run down my head or face before my fingers can start to rub anything.  So I decide to work in sections and use a lot.  Pour, rub, move to another location, pour, rub, repeat ten times or so.

My conditioner, a tablespoon of apple cider vinegar and a cup of water mixed in an old spaghetti jar, was much easier to apply as I just poured the apple vinegar mixture on the lower half of my hair.  Ten minutes after my shower my hair didn’t smell like vinegar, or apples for that matter, just hair.
That day my hair seemed a little dry and frizzy but that’s what happens when I don’t use conditioner so no biggie.  Three or four days later when I (or the hubs) couldn’t take it anymore, I washed it again.  This time I poured the vinegar on my roots too, not just the end.  I kept at it for a few weeks. 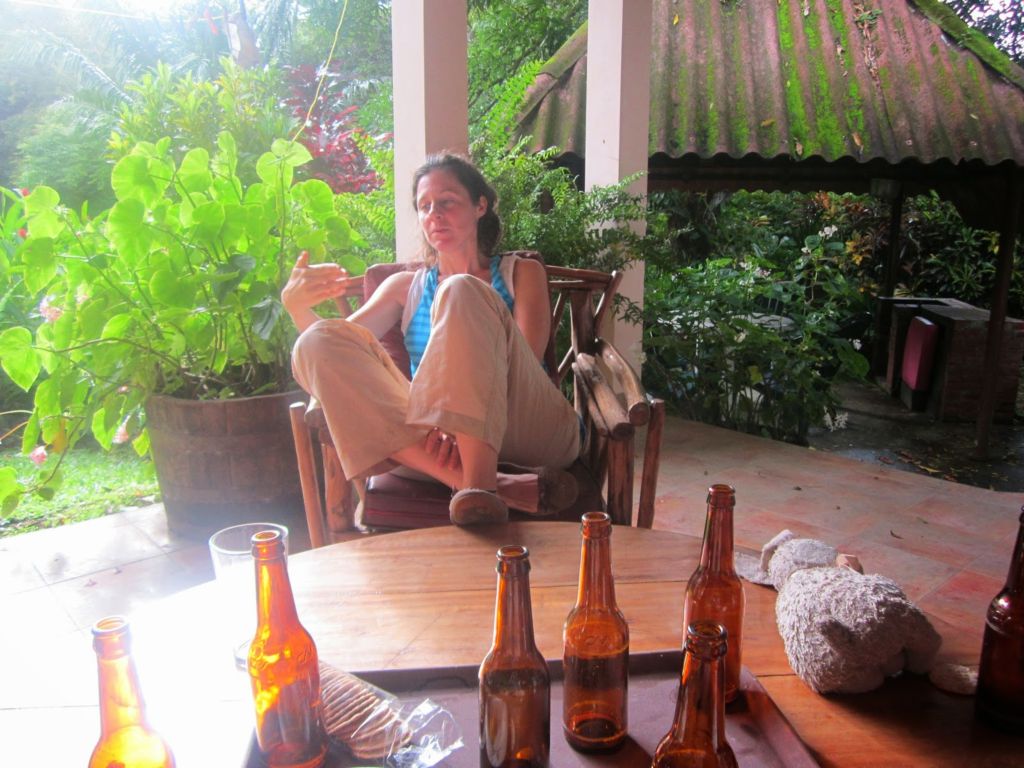 As close a pic as you were allowed during the No Poo days.

One day, when I couldn’t stop scratching my scalp.  The next day was worse.  It was alleviated by an apple cider vinegar rinse but I started feeling like a junkie – running to the shower, strengthening the concentration each time.
But the worst part was I couldn’t get garden rake through my hair, let alone an off-the-shelf hair brush.  My Roseanne Roseannadana mop was winning the war and shampoo was there, ready to snatch up the postbellum contracts.
As I comb the internet (yep, on purpose) now, I see I could have added some tea tree oil to my soda mix to help with the itching – but at the time tea tree oil was about four hours, two buses and a taxi away so this wasn’t an option.  But quitting was.  And I think I may have been pregnant?  Is it bad that I’m not sure?
Today, my next Zero Waste move is to find some shampoo in bulk so I can stop tossing the shampoo and conditioner bottles.  Although around here they are recyclable.  Instead of bath toys I let my kids play with the empty containers in the shower to clean them out before I pitch them in the recycle bin.
Maybe I’ll try poo-less again.  Maybe I’ll try poo-less + conditioner?  Has anyone else with Dilbert Triangle Hair Girl hair tried to go poo-less?
**For those bold enough to try, here’s a good link.
***For those that are successful, here’s a link for what to do with leftover shampoo.